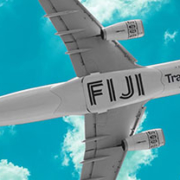 We are preparing for the eventual resumption of international flights under strict health and medical safety requirements as part of our Travel Ready programme.

Travel Ready details our commitment to safeguarding the health and medical safety of our customers and staff. Integral to the programme is the newly created role of medically-qualified Customer Wellness Champions (CWC).

The Customer Wellness Champions will lead our medical safety response on the ground and in the air.

If you are keen to be part of our world and have what it takes to be a Fiji Airways Customer Wellness Champion then we would love to hear from you.

Click here for more details on the role and how to apply. 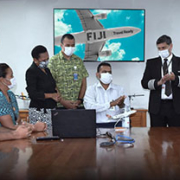 Our in-house teams, including our aviation medical advisor Dr. Rounak Lal, have been working closely with health authorities and other stakeholders to get us #TravelReady.

We have reviewed all interaction points across our #CustomerExperience, and taken guidance from @WHO
@IATA and @icao to draw up enhanced safeguards for our guests and staff when we resume international flights. 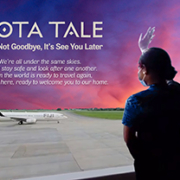 We’re all under the same skies. Please #stayhome and look after one another. When the world is ready to travel again, we will be here, ready to welcome you to our home. #SotaTale #StrongerTogether #Fiji 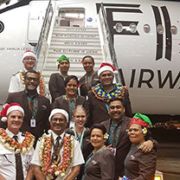 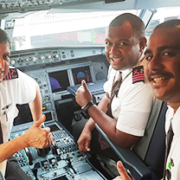 Have you spotted our pilots with their #pink epaulettes?

Our #FijiLink and #FijiAirways pilots are flying #pink this October. This #PilotsFlyPink campaign to help raise awareness on breast cancer is the initiative of our pilots. 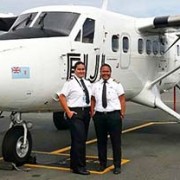 We are loving this rare beautiful shot of one of our longest serving pilots, Captain Ilaitia Caucau and his son Second Officer Edwin Caucau. Its not everyday that you get an opportunity to control a flight deck with your dad ✈.

#Repost @edwincaucau
• • • • • •
Happy early Father’s Day to this Great Dad right here, thanks for teaching me to be a man in Life & Aviation. 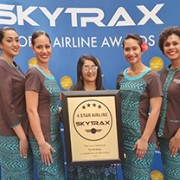 We brought the BULA to Paris! We’re soaring even higher and joining an elite group of airlines after being awarded a 4-star rating by Skytrax at the World Airline Awards, as well as Best Airline Staff in Australia Pacific.

The Skytrax World Airline Awards are one of the most sought after quality accolades for airlines. Skytrax benchmarks traveller opinion and carries out quality evaluations around a number of key categories and principles for airlines around the world. Skytrax Ratings are recognised as a global benchmark for airlines. A 4-Star Rating is a mark of distinction that recognises excellent standards, showcasing an airline’s unwavering commitment to provide high quality product and service values both onboard and on the ground. Fiji Airways joins airlines such as Emirates, British Airways, Etihad, Air New Zealand and Qantas as a 4-Star airline.

“Best Airline Staff in Australia Pacific” recognises the combined airline staff service for both onboard and ground staff, in the Australia Pacific region through passenger feedback and Skytrax evaluation.

Mr. Andre Viljoen, Fiji Airways Managing Director and CEO, believes the 4-Star rating and award is a testament to the airline’s hard work over the past four years, and the excellent customer experience the Fiji Airways’ staff deliver in the air and on the ground.

“We are extremely proud to have been awarded a Skytrax 4-Star rating and the Best Airline Staff in Australia Pacific. The Skytrax Awards are highly prestigious and we are thrilled to be recognised with a 4-Star rating, a goal we set out to achieve in 2015. It has been a four-year improvement journey to raise us to a 4-Star airline status, after massive investments in customer experience, improvement in our product, and enhancing our service culture and standards through the UP! Your Service education programme.”

“The Best Airline Staff Award is a highly contested accolade, which our staff and crew are humbled to have received. Fiji is famous for its world class hospitality and that underpins everything we do. Our commitment to be the best representatives of our beautiful home have borne fruitful rewards for us,” Mr Viljoen said.

The 4-Star Rating and Best Airline Staff Award cap off a great first half of 2019 for the airline, having recently announced more investments with two new additions to its widebody fleet, the Airbus A350 XWB. The new aircraft are the latest step in the airline’s continued focus of offering a world class flying experience for travellers. Fiji Airways was also the launch airline to join the oneworld alliance as a oneworld connect partner. 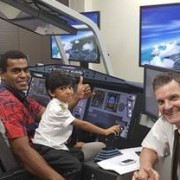 Master Akyhielan ready to take on the controls with the assistance of FO Esala Bai and Captain Petri Huju. Captain Anton is in uniform. 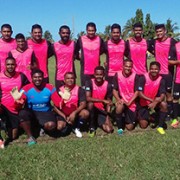 Our FJ Soccer Club plays against local clubs and internationally – against other Airline / Airport Staff Clubs.